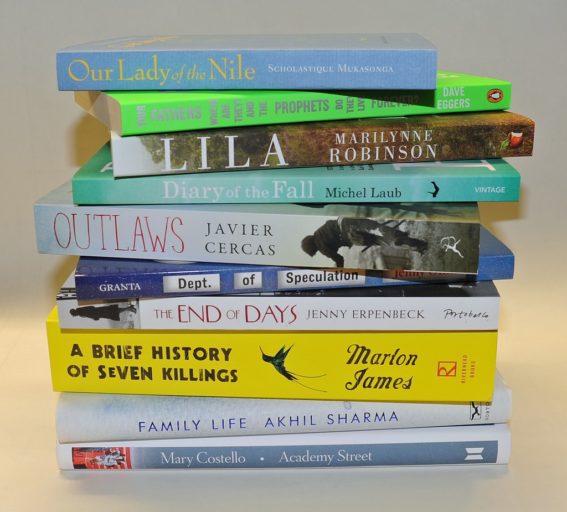 The list includes four novels in translation from Brazil, France, Germany and Spain, Academy Street by Irish author Mary Costello, and novels from India, Jamaica and the USA.

The International DUBLIN Literary Award is worth €100,000 to the winner and is the world’s most valuable annual literary award for a single work of fiction published in English. The award was launched in April 1995.

The titles on this year’s shortlist were nominated by public libraries in Belgium, Brazil, Canada, Germany, India, Ireland, Jamaica, New Zealand, Norway, Spain, Sweden, Switzerland, the UK and the USA”, said Ardmhéara / Lord Mayor, Críona Ní Dhálaigh, Patron of the Award. “This is the beauty of this award, proudly sponsored and now fully owned by Dublin City Council; it reaches out to readers and authors worldwide, while also celebrating excellence in contemporary Irish literature represented on the 2016 shortlist by Mary Costello.”

“The 2016 winner will be chosen from this intriguing international shortlist which includes five women writers. The novels come from Brazil, Germany, India, Ireland, Jamaica, Rwanda/France, Spain and the USA”, said Margaret Hayes, Dublin City Librarian. “While many of the stories reflect contemporary themes, they bring us characters facing timeless challenges of love and loss, of innocence and isolation. These engaging stories are set against contrasting landscapes which include Brazil, India, and Rwanda.”

Two of the shortlisted authors have been shortlisted previously. Javier Cercas was shortlisted in 2008 for his novel The Speed of Light and Marilynne Robinson in 2010 for Home.

The five member international judging panel, chaired by Hon. Eugene R. Sullivan, will select one winner which will be announced by Ardmhéara / Lord Mayor, Críona Ní Dhálaigh, Patron of the Award, on the morning of Thursday 9th June.

The Lord Mayor reminded Dubliners that they can borrow the shortlisted novels from Dublin City Public Libraries. “Readers have plenty of time to pick their own favourite between now and 9th June, when I announce the winner.  Tá mé cinnte go mbainfidh daoine sásamh as na leabhair seo a léamh, arsa an tArdmhéara.”

The International DUBLIN Literary Award is presented annually for a novel written in English or translated into English. The award aims to promote excellence in world literature. It is proudly sponsored by Dublin City Council and is managed by Dublin City Public Libraries.

The award is open to novels written in any language and by authors of any nationality. Nominations are submitted by library systems in major cities throughout the world. Founded in April 1995, the award is now in its 21st year.

Recent previous winners of the award include:

All the longlisted novels can be viewed on http://www.dublinliteraryaward.ie/nominees